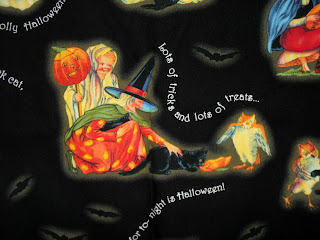 It's hard to believe that Patchwork Pie is 3 years old!
Starting this blog was a Halloween gift to myself. I was scared to do it, but I have enjoyed sharing with everyone ....and will continue to do so! There has so much happening that I'm quite behind. I've got classes to tell you about, and shops to show (including a new one in my neighborhood!). Then next Sunday it's time to go on a quilters' retreat!
So just for today, I'd like to share this great retro-look fabric from Marcus Bros.
Don't you think it would make a fabulous set of fabric postcards? Maybe if I start them now, I'll have them done by next Halloween!
I'd like to truly thank my Followers and other Faithful Readers for enjoying a piece of the Pie with me. There are some new adventures ahead, and I'm glad to know I'll have you along for the ride!
Posted by Sunnie at Sunday, October 31, 2010 2 comments:

Stripping for a Wedding (Blanket, that is!)

When my son and wife-to-be decided on a Native American wedding ceremony, to be conducted by a good friend who is an Iroquois medicine woman, they needed a white blanket.
So of course when your son asks for something special, it doesn't matter what else is on the schedule...I said I would make it! But there wasn't time to make a real quilt, so I fell back on 2 grand traditions: Strip piecing and "Summer spreads" (like a quilt but no batting layer). 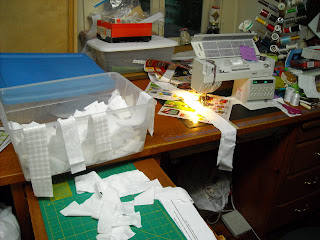 First I collected all my white fabrics, which is hard because I generally do not use white. Then I asked all my friends for fabric, and finally I was "forced" to go fabric shopping!
After that, I randomly cut strips between 1.5" and 3" in width. The idea was to make something all white...but still show a lot of texture with the seams and slight differences among the whites.
For the foundations, I used pages from the Sunday newspaper sales flyers! It's lightweight and tears away easily. I cut them into 10.5" squares, as that is the largest size I could get from the most flyers. 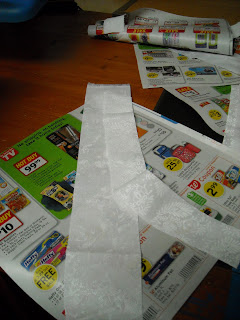 Each square starts with a strip going diagonally, right side up.
Then lay another strip on top, with the right sides facing, and sew all the way to the end of the paper.
Don't bother to measure anything...just cut off the extra length. 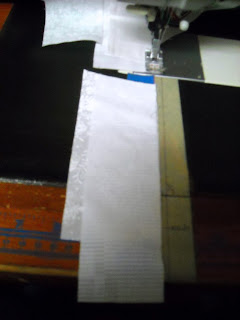 Some of the short ends can be sewn into pairs, which are handy for filling up the paper foundation out near the corner...the seams get short there. I sewed a couple of short sets in between the full squares to keep that chain going! 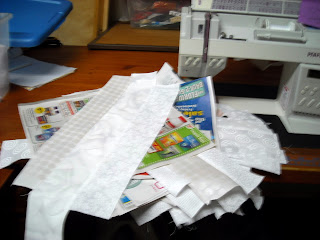 I did take the time to press the strips open, so there would not be any surprise tucks in the seams. But I only did it after I had 2 strips to press...one on each side of the center. 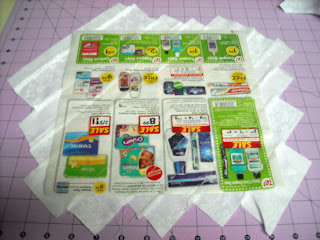 Now it's time to trim!
Strip or string piecing is a wonderful way to use up scraps...and I must admit it bugged me to be "wasting" so much fabric that I bought just for this project!
Trim to the edge of the paper foundation, if you cut it a certain size. There is enough excess fabric here that I could have cut the blocks a bit larger, if I had wanted. Like maybe adding a forgotten seam allowance? 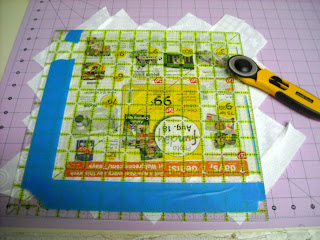 Love that blue painters tape...it doesn't leave any residue on the ruler or fabric or whatever.
I trimmed the top and right side, using the ruler's edge, then turned the block around to finish the other two sides. The tape is marking where to line up the trimmed corner before making the second cut. 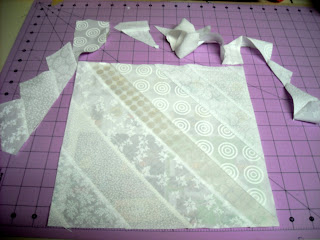 All trimmed up and ready to go! Some of the fabrics had a shine, and I tried to get at least one of those in each block.
The paper comes off fairly easily if you fold it back and crease it before tearing.
And it helps a lot if you remember to sew all the strips with a shorter stitch!
The blocks are sewn together as with any quilt blocks. The seams are not intended to be matched...in fact, I don't think they could be!
All the seams can be set to run the same direction, or they can be set to alternate, which looks like an X or a diamond. 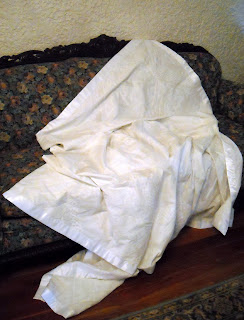 This is techincally not a quilt, as it has only two layers. The backing is white, and I just stitched "in the ditch" around each block to keep the thing from puffing up like a big marshmellow!
And beacuse it was to be part of the Blanket Ceremony, I finished the edge with a white satin blanket binding. 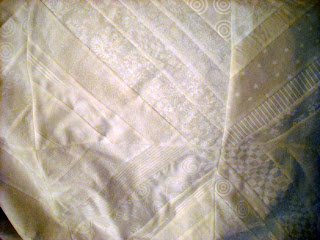 It was hard to make something all white....I am a color-lover! Bright colors! Bold prints!
But I'm pleased with this, even if it is a lot more subtle than my usual work. 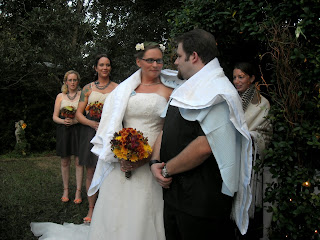 Here's the happy couple with the blanket symbolizing their union. May they have a long and happy future together!
The white blanket's future is unknown at this time.
It might just stay as it is. Or I might take it apart and use it as a background for some appliques, and then quilt it with colorful thread!
Only time will tell.
Posted by Sunnie at Thursday, October 21, 2010 1 comment:

Quilts can help us understand what water means. Hollis Chatleain's "Precious Water", a Best of Show at the IQA in Houston, is all about how every living thing depends on water.

How much water did you use today?
Did you wash your hands...brush your teeth...do laundry...take a drink...you know you flushed at least once!
Each time you turned on the tap you probably used half a gallon to several gallons of water.
Washing a quilt takes maybe 20 gallons.
All that water was clean and safe to drink, even if it never got close to your mouth.
Just one gallon of water weighs over 8 pounds.
So... what if  you had to walk several miles to the only place to get any water...and that water was not clean, and when you and your family used it, you all might become sick? And you had to spend hours carrying water every day, because even unsafe water is better than none?
More than a billion people around the world do not have clean water. More than 2.1 million people  (mostly children) die each year from diseases found in water. Even in our own country.

October 15 is Blog Action Day, and this year's topic is clean, safe water.
I signed up to tell you these things about water, because it's something we all depend upon, and yet mostly take for granted.
Until we can't get it...the plumbing is broken, the electric is off and the pump doesn't run. Think about a time you weren't able to get water in your own house, how upset you were!
Remember that time when you next go into the kitchen or bathroom.
Look at the amount of water that just runs down the drain.
Then think about the woman, and her children, who carry just a few gallons of water for all their daily needs. And still run the risk of becoming ill from bad water.

Thank-you for letting me get off-topic today. I know that quilters are people who care about others, and knowing about a problem is the first step towards improving a situation.

ADDED NOTE: What good is a plea for funds unless we state what the money is for? CWS, and many other fine agencies, help villages drill wells so people can get that safe clean water in a nearby location. What else could truly help each person and improve so many lives?

Coming next: Stripping for a Wedding!
Posted by Sunnie at Friday, October 15, 2010 No comments:

Sunnie
It's all about quilting, 24-7(not really, but that sounds good!)

All the pictures and text here are copyrighted by Sunnie, so if you'd like to use anything from this blog, please contact her for permission!
Thanks,
The Mgt.

Patchwork Pie by by Email